Objectives and aims of the campaign

One of the tasks of the the National Centre for Culture is to shape a civil and historical awareness of Poles. The social and educational campaign ‘I Remember. Katyn 1940’ is an example of its practical execution. The aim of the campaign is not only to convey the historical truth, but also to inspire reflection on the shape of contemporary patriotism. A civic patriotism, open to the future, which builds its strength on the fundament of the past.

The social and educational campaign ‘I Remember. Katyn 1940’ is a part of the overall effort to restore this tragic event’s collective memory.  We are proud that the National Centre for Culture was one of the first to raise the subject of Katyn and the NCK’s project provoked actions of other institutions and other people. The social and educational campaign ‘I Remember. Katyn 1940’ was initiated in April 2007 in the period preceding the premiere of Andrzej Wajda’s movie ‘Katyn’ and also in the period preceding the promotion by the President of the Republic of Poland the officers executed in the Katyn camps. By making the campaign ‘I Remember. Katyn 1940’ we are trying to emphasize the personal aspect of the Katyn Massacre, show the tragedy of particular persons, whose lives also transferred into the tragedies of their loved ones. As a part of our campaign we prepared a multimedia show, concerts, DVDs, we also issue educational publications and Biblioteka Katyńska – a series of books that tells more about the officers of the Second Polish Republic. The Katyn button is a symbolic token of remembrance of heroes of our campaign – a replica of a button from a officer uniform found in Katyn. The participants of the event will have a chance to leave a trace of their remembrance of the officers by sending us a photo with the Katyn button through the page Katyń. Guzik mnie obchodzi on Facebook. 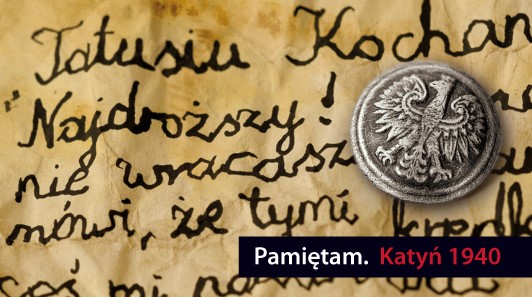 „Katyn Button” – symbol of the campaign

The objective of the campaign ‘I Remember. Katyn 1940’ is to show the Katyn Massacre not necessarily through the lens of the statistics or the extent of the cruelty, but through individual and personal tragedies of particular people. We wish to show the lives of the victims and their families, last letters, tokens, to make people aware that in Katyn and other camps died not twenty-some thousand anonymous officers, but twenty-some thousand particular people, each of which had their own story.

A symbol of the victims is a replica of a button from a Polish officer uniform found in the Katyn forest. This physical evidence that is a ‘relic’ found in the ‘death pit’ was supposed to become, in theory and in fact it happened, a token of remembrance of the heroes of this horrific crime. The inspiration for choosing this symbol was a poem by Zbigniew Herbert ‘Buttons’, dedicated by the author to one of the executed.

As a part of the campaign the National Centre for Culture produced and distributed ca. 300 000 buttons to date. The partners of our campaign produced 200 000 more.